Boron is far from Boring!

Boron is far from Boring!

An in-depth look at Boron, its role in the body, the environment and in Australian HTMA 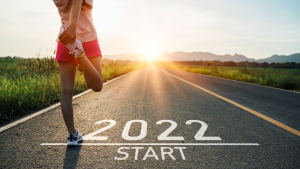 Boron is a naturally occurring element. It’s found in the environment, combined with oxygen and other elements in compounds called borates.

Borates are widely found in nature, and are present in oceans, sedimentary rocks, coal, shale and some soils. Boron is released to the atmosphere via volcanic activity and from geothermal steam. It’s estimated that natural weathering is a significant source of environmental boron (Murray, 1998).

There are several commercially important borates, including borax, boric acid, sodium perborate, and the minerals ulexite and colemanite. Industries that can release boron include glass manufacturing, cement works and leather tanning. Sodium Borates and Boric acid are widely used in cosmetics and commonly found in make-up, skin and hair care preparations and shaving creams.

Low levels of boron are found naturally in our food, the air we breathe and our drinking water. These contribute to normal intake.

Boron is also found in everyday substances such as medications including analgesics, antibiotics, decongestants, antihistamines, laxatives, antacids, and even in cosmetics.

Boron contamination usually occurs through ingestion or inhalation. It is unlikely to be absorbed directly through the skin when the skin is intact, however rapid absorption occurs through broken or damaged skin.

Although no specific biochemical function for Boron has been discovered in humans it appears that dietary deficiency results in adverse changes to biological functions (Wise, 2000).

According to the NHMRC there is no RDI for Boron. The RDI’s do not include food components that are believed to be but not yet proved essential. Patterns of usage however indicate that according to available evidence Boron is essential for human beings with food sources providing the most exposure.

Rich dietary sources of Boron can be found in plant-based foods including apples and pears, carrots, grapes and green leafy vegetables. Nuts, honey and dried fruits and especially dates are good sources of boron.  The average daily intake from dietary sources is 2.02mg/day (with a urinary excretion of1.9mg/day).

Function: The body’s need for boron

There is substantive information that boron may be important for mineral metabolism, brain function and performance, hormone regulation, to assist calcium absorption and to help prevent bone-related disorders, such as osteoporosis, arthritis and tooth decay.

Apparent deficiency symptoms of Boron include the following

Data support the hypothesis that boron is an essential element and that it is involved in regulating parathyroid hormone action. It is believed to help convert Vitamin D.  Therefore, it is likely that boron influences the metabolism of calcium, phosphorus, magnesium and cholecalciferol.

According to Darren Wise (2000), Boron has an influence on blood and serum minerals and has been shown to produce positive retention of calcium, magnesium and phosphorus that would be beneficial to bone metabolism.

Boron is rapidly absorbed and excreted, mainly in urine. Urinary Recoveries depend on dietary intake and may range from 30-90%.

Boron appears rapidly in the blood and tissues of mammalian species; up to 95% absorption appears after oral ingestion (Sutherland & King, 1998).

It would appear that there is no evidence supporting the theory that boron accumulates in human tissues when consumed at normal dietary or supplemental dosages. Tissue homeostasis is maintained by the rapid elimination of excess boron through urine, and perspiration. Homeostatic control is maintained by the kidneys with up to 84% recovery in urine obtainable from oral dosage (EHC, 1998).

Chronic or toxic human exposure to Borates can result in

Boron toxicity results in a Vitamin B2 deficiency by antagonising and increasing urinary losses (EHC, 1998).

Magnesium is also antagonised by excess Boron and may be useful in supplementation for boron toxicity.

Interestingly, while no ‘adequate’ intake of Boron has been set, the World health Organisation, European Union and other regulatory bodies have set safe or tolerable upper limits (Nielsen & Meacham, 2011).

Borates are released to the air from natural and industrial sources. According to the National Pollution Inventory, boron and compounds ranked 52 out of 400 based on environmental hazards and human environmental exposure to the substance. It registers 1.7 on a hazard rating of between 0-3 where 3 represents a high hazard, 2 represents a medium hazard and 1 is harmful to health.

High concentrations of boron tend to occur in soils which have formed with the addition of marine sediments. In regions experiencing low rainfall the soluble boron salts can accumulate too much higher concentrations in the root zone affecting plant growth (Moseman,1994).

Excess boron cannot be removed from the soil and in seasons with low rainfall toxic levels are more pronounced.  Approximately 32% of land in SA has toxic concentrations of boron exceeding 15mg/kg.  The degree of absorption of boron onto soil particles and the uptake of Boron into plants is dependent on the pH of the soil, the organic matter, clay and the iron and aluminium content (IPCS Environmental Health Criteria (EHC) 204 Chapters 1.1.2).

The “wheat belt” of South Australia has identifiable soil Boron toxicity to a depth of 30 to 40cm.  Australian farmers have developed varieties of grains, legumes and other crops with a tolerance to boron in order to maintain plant health and productivity under these conditions. Increasing soil salinity and pH exacerbate the boron toxicity.  Increasing soil salinity in drought-prone areas has added to this accumulation in soils and water supplies. With no methods of removing toxic levels of boron from the soil, boron resistant crops are being grown and developed in order to combat this problem. Although this provides a benefit for the grower, one can assume that we will see growing levels appearing in our food sources.

Water supplies in drought-affected areas are potentially high sources of Boron. In South Australia, drinking water levels have a reported range of between 0.02 mg/L and 1.3 mg/L and it is easy to see that the Australian average intake of 2.232mg/day will be easily exceeded in these areas.  The safe level for drinking water nationally has been set a maximum of 0.3 mg/L/ (NHMRC and ARMCANZ, 1996):

The table shows the totals of industry sources of emissions of Boron & compounds in Australia. 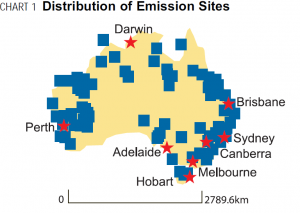 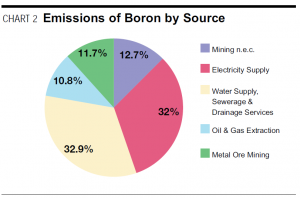 Although the evidence suggests that human bioaccumulation of boron is minimal, the storage areas tend to be mainly bones and dental enamel. The boron content of hair is representative of the levels in soft tissue.

According to World Health Organisation recommendations, the best technique for measurement of boron present in biological samples is Inductive Coupled Plasma, Mass Spectrometry (ICP-MS). This method is the most sensitive allowing for lower detection limits. This recommendation supports the use of Hair Tissue Mineral Analysis, using ICP MS as an effective indicator of tissue boron levels. 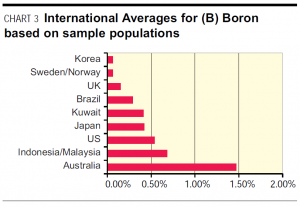 Clinical finding: This graph shows that boron levels in Australian hair samples are approximately 10 times higher than the world average.

Neilson F. H. (1990). Studies on the relationship between boron and magnesium which possibly Affects the formation and maintenance of bones. Magnesium and Trace Elements, 9(2), 61-9